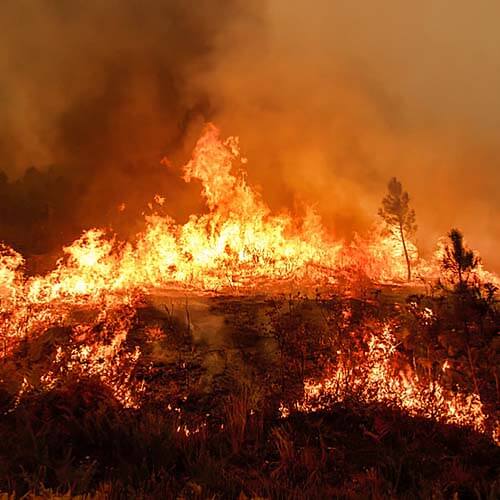 Fires can be very unpleasant, no matter their size, and more than fire damage or potentially destroying your home, they can leave behind an odor that is almost impossible to get rid of. No matter the cause of the fire, whether it be from a kitchen accident, or a dropped cigarette, once you have fire odor in your home, you will want to remove burnt smell right away. Leaving objects in your home that suffered fire damage will result in an odor that is very difficult to get out, and this can be very frustrating. People who are worried about how to get rid of fire and smoke odors can rely on the Odorox/Pyure Hydroxyl Processor, as this will eliminate odors where they start and prevent them from spreading. This is especially important if you have to eliminate smoker smells/odors house that are located in your air ducts.

It’s easy to use these processors to eliminate smoke smells/odors furniture. Simply place the Hydroxyl Processor in the room that has the most smoke damage or bad odors and turn it on. By closing your widows, opening doors and drawers in your home, and keeping your air ducts open, you will be able to easily and efficiently combat offensive odors. Hydroxyls using Odorox/Pyure Air hydroxyl processor will be able to travel throughout your home, destroying any bad odors that they come into contact with. You may need to leave the processor running during the night or for a few days straight if there was a major smoke and fire issue and the odors are strong.

Smoke Damage in Your Home

It’s generally very obvious where the fire damage in your home is located, but some smoke damage may not be obvious and sometimes won’t be visible for days after the fire. Because of this, you need to be aware of signs of damage and know when to call a professional. Additionally, smoke can permeate your home in places where you are unable to see that there has been damage.

Smoke damage is often visible inside your home and will appear as discoloration and stains. Yellowing of the floors and walls, corrosion and rust on metal, and permanent discoloration of porous surfaces are all common problems after a fire.home may not look damaged but will smell smoky after a fire. It can be hard to get rid of the smoke residue in your home.

Smoke damage is visible on ceilings and walls but can also permeate deeper into your home, getting into your insulation, air ducts, and HVAC system. This means that smoke problems can reoccur in the future, causing health problems. Hydroxyl Processors used in eliminating smoke odors can help decrease the likelihood of future problems. You may also have water damage form a fire, this leads to entirely different set of issues covered under another heading.

Hot air rises, which means that the greatest concentration of smoke in your home will generally be along the ceiling. Nails in the walls and ceiling can also attract smoke particles, resulting in a ring forming around them on the walls.

It’s normal for smoke residue that can exposes] children to chemicals. Smoke residue can move to the corners of a room, looking like cobwebs. This is because the ionized smoke particles will be attracted to certain types of surfaces, which causes them to gravitate to these areas in your home.

Walls and Windows With Fire or Smoke Damage

What to Do With Fire Smoke Damage

Get professional smoke damage restoration as soon as possible after your fire to minimize the number of repairs you will need to complete. Contact Odorox/Pyure Air now 732-251-9506 ext. 211 for questions and assistance in removing smells and odors due to smoke, fire or any other reasons.

Every year, I get a "cough," which ranges from somewhat annoying to almost incapacitating and lasts for three weeks to 4 months!. At its best, the persistent cough is annoying to me and those around me and, at worst, has me moments from passing out from coughing so hard and so long. I keep the Hydroxyly Processors running 24 x 7, and they are quiet and unobtrusive. Over the years, I have visited no less than 13 different doctors, from General Practitioners to Pulmanlogists to Cough Specialists at Montefiore Hospital in the Bronx. Nobody nor anything had alleviated the cough. I have tried multiple in-office and home therapies, a myriad of various drugs, breathing exercises, and more.

Just less than two years ago, after reading about Hydroxyl processors and their health benefits, I obtained two MySpace room Hydroxyly Processors/Air purifiers and began using the Pyure MySpace Hydroxyly processor machines, both in my office and at home. I am incredibly thrilled to say unequivocally that I have not coughed in just shy of two years! A secondary benefit cropped up. I used the OdoroxAir machine to destroy viruses, molds, bacteria but then found out that it also destroys COVID; wow!. The devices are small enough to pack in a suitcase or through in the car, and I have taken the MySpace to Florida (twice), using it in hotel rooms and a week in an Airbnb.

This MyaSpace machine and OdoroxAir have both been godsends, protecting my family and me from COVID and alleviating a close to 10 year-long mystery of chronic coughing. In addition, my wife gets Bronchitis often; she also has a recurring history of Bronchitis; she also has had no coughing, and of course, COVID free even before we had the vaccine.

We are building a new home, and we intend to incorporate an Odorox®/Pyure IDU™ Model into the HVAC system in the house. Worth every cent for not only wellness, but peace of mind: that our home will be free of everything from VOCs to Mold, bacteria, MRSA, COVID, smells, viruses, and more.

I can say that I Highly recommend both OdoroxAir and Pyure Hydroxyl processors.

I would like to thank you for introducing our hotel to your green technology for odor elimination. Traditionally I am very skeptical and not impressed easily when it comes to new technologies that claim to do so many wonderful things. Well, I can tell you that the job your Odorox machines have done removing odor on our smoking floor/hallways, guest rooms, ballrooms, and common areas has made me one of your strongest supporters. We set your machines up in a desired area and go about the rest of our daily duties. When we return a short time later the space smells fresh and revitalized and your Odorox machine is ready for its next challenge.

As the Director of Housekeeping at a very busy Hilton in Parsippany New Jersey I am regularly confronted with various odor challenges. Just recently we started refinishing our bathtubs in all of our guest rooms. We know from past experience that this process can create a strong chemical small that can make our guests and staff uncomfortable. Equipped with your machine I am happy to report these nuisance odors are things of the past.

Keeping our property smelling great is a key component to keeping our customers satisfied with the Hilton experience. I would like to thank Odorox for making my job just a little bit easier.