How to Purify Air from Mold, Mildew, Smoke and more. 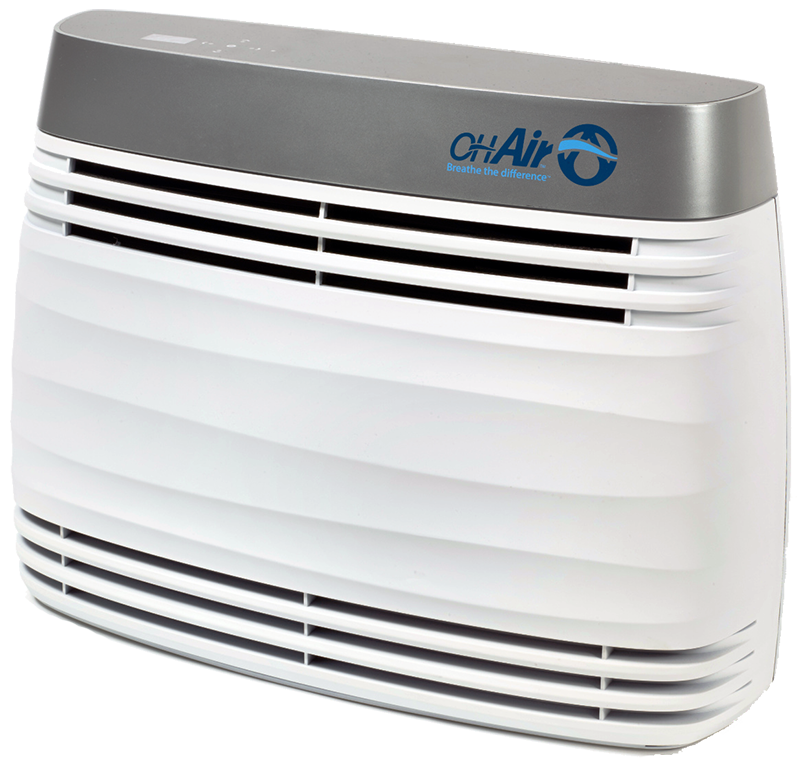 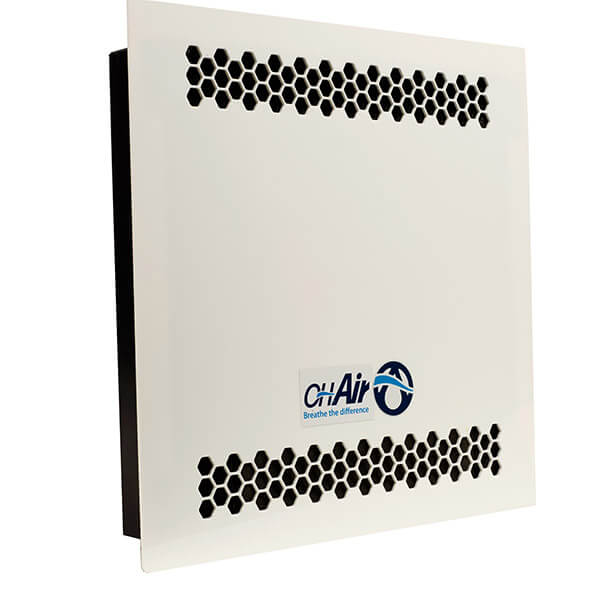 This unit is designed for apartments, condos, offices, hotel rooms, senior care facilities, medical offices, classrooms, and restroom applications. When continuously operated, it will blanket the area with hydroxyls to eliminate odors and germs. It can be recessed in a wall or installed into a ceiling tile. It can be hard wired and daisy chained together since it only draws 100 watts. Coverage rate: Up to 350 sq. ft. 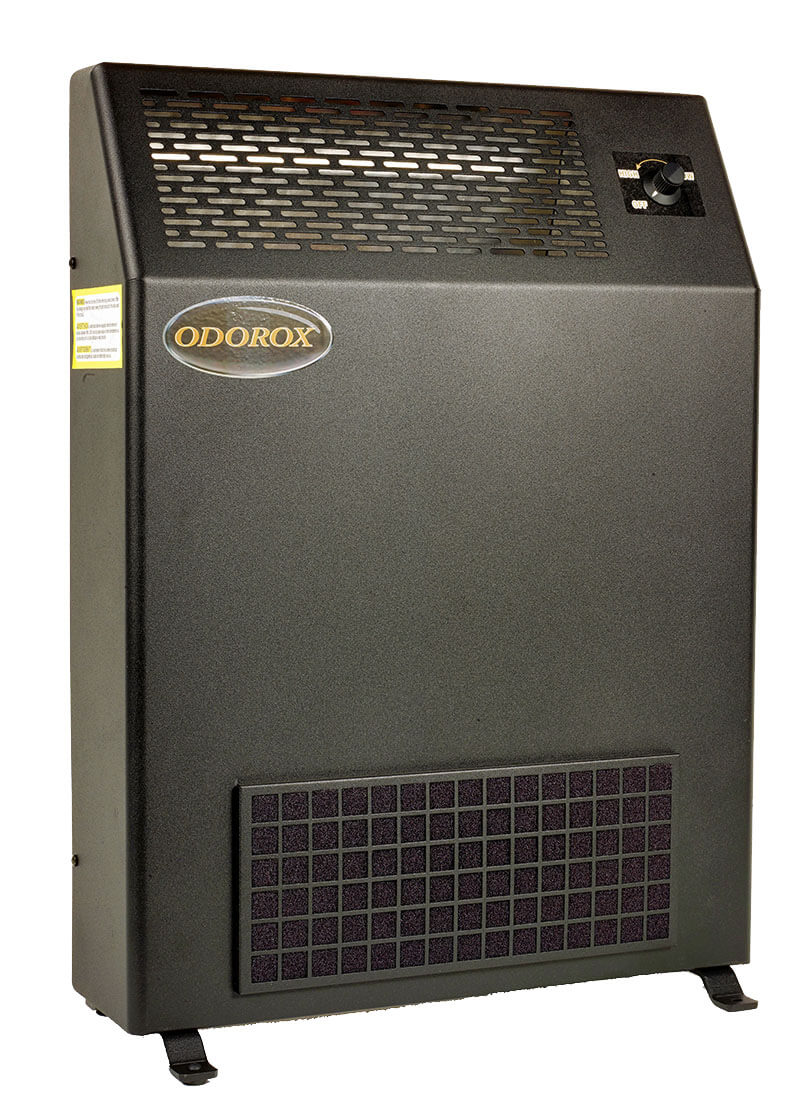 This unit is ideal for eliminating harmful germs, chemical VOCs, and odors typically found in public spaces within enclosed buildings. It is the perfect choice for medical offices, long term care facilities, classrooms, commercial offices, residential homes, and apartments. It is equipped with a variable speed fan control and a washable filter. Coverage rate: 500-900 sq. ft. 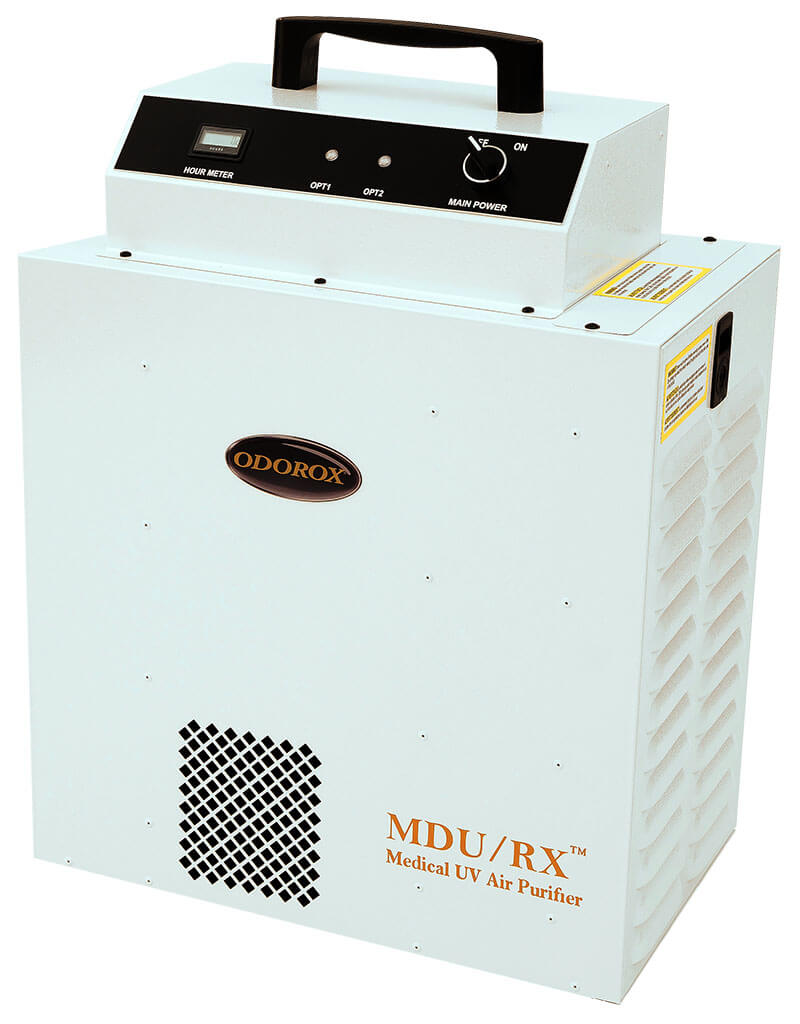 The MDU/RX™ model is designed to treat areas up to 500 square feet that would have 8 to 10 foot ceilings (~1300 to 5,000 cubic feet of space). The system is operated by the use of an on-off switch which activates both optics and the fan. The fan is set at a fixed speed of ~150 cubic feet per minute. When in use, an indicator light on the outside of the case is lit.

This unit is designed for heavy concentration processing normally associated with athletic facility decontamination and fire restoration. It is equipped with a selector switch for 1 or 2 hydroxyl generating optics, variable speed fan control, hour meter and a washable filter. The variable speed built in fan is adjustable from approximately 250 to 500 cfm and operates using only 1.9 Amps. Its durable metal construction and light weight design are ideal for transporting. Coverage rate: 1,500 - 2,500 Sq. ft. 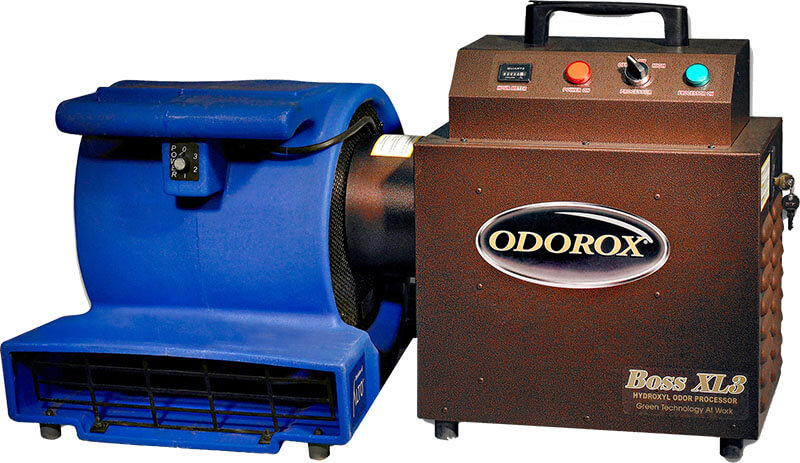 This unit is the perfect choice for decontaminating large areas. It is designed for use with an air mover to increase coverage rate. It is especially effective when used for fire restoration, flood and mold remediation, chemical off gassing, and other similar commercial / industrial needs. It is also ideal for athletic facility decontamination. It is equipped with a selector switch for 2 or 3 hydroxyl generating optics, hour meter and a washable filter. Uses only 1.6 Amps. Its durable metal construction and light weight design are ideal for transporting. Coverage rate: Up to 3500 sq. ft. 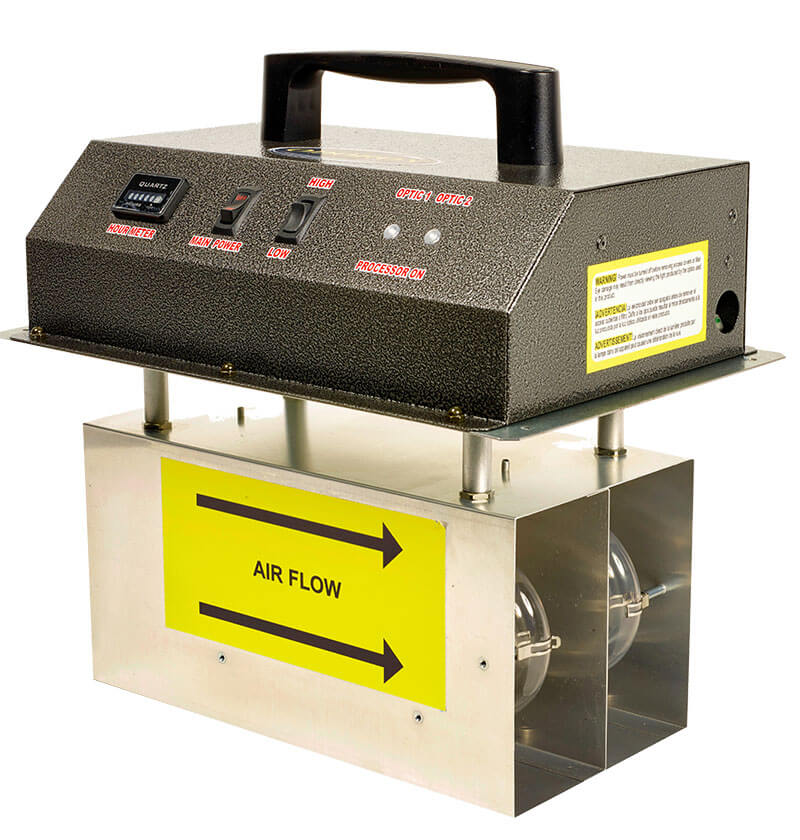 This "Induct Disinfection Unit" is used to eliminate bacteria, virus, odors, and mold contamination. This unit is ideal for medical, clinical, institutional, veterinary, hospitality or residential use. It is equipped with a selector switch for 1 or 2 hydroxyl generating optics. The unit is designed for continuous operation through your existing HVAC unit. It is excellent for the chemically sensitive or medically compromised individual who needs the entire living or working space decontaminated. Coverage rate: Based on HVAC Unit. Coverage is 300 to 3,000 sq. ft. 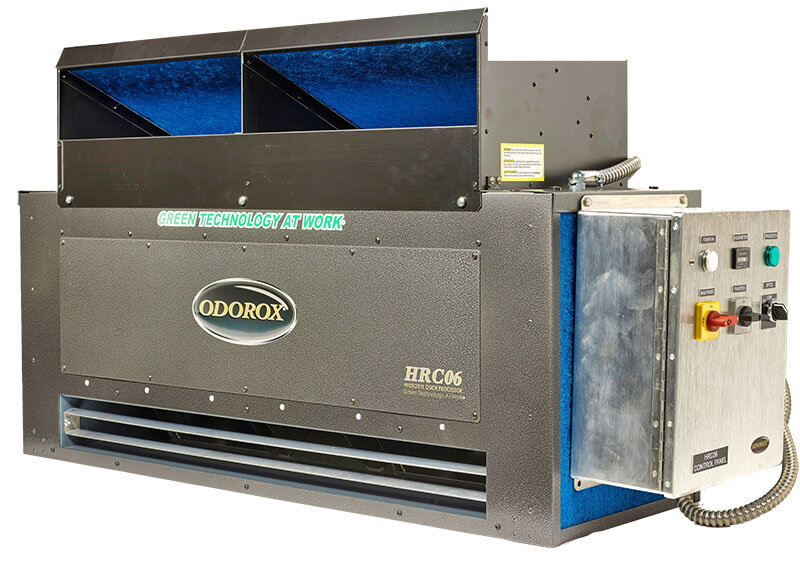 This unit eliminates bacteria, viruses, VOCs, odors, off gassing and mold contamination. It is ideal for commercial, institutional, hazmat, veterinary and hospitality use. It is equipped with a switch selectable 3 or 6 hydroxyl generating optics. It is designed for continuous operation to blanket your odor source. This unit is ideal for sports arenas, locker rooms, fitness facilities, and daycare facilities. Coverage rate: between 3,400 and 6,500 sq. ft. 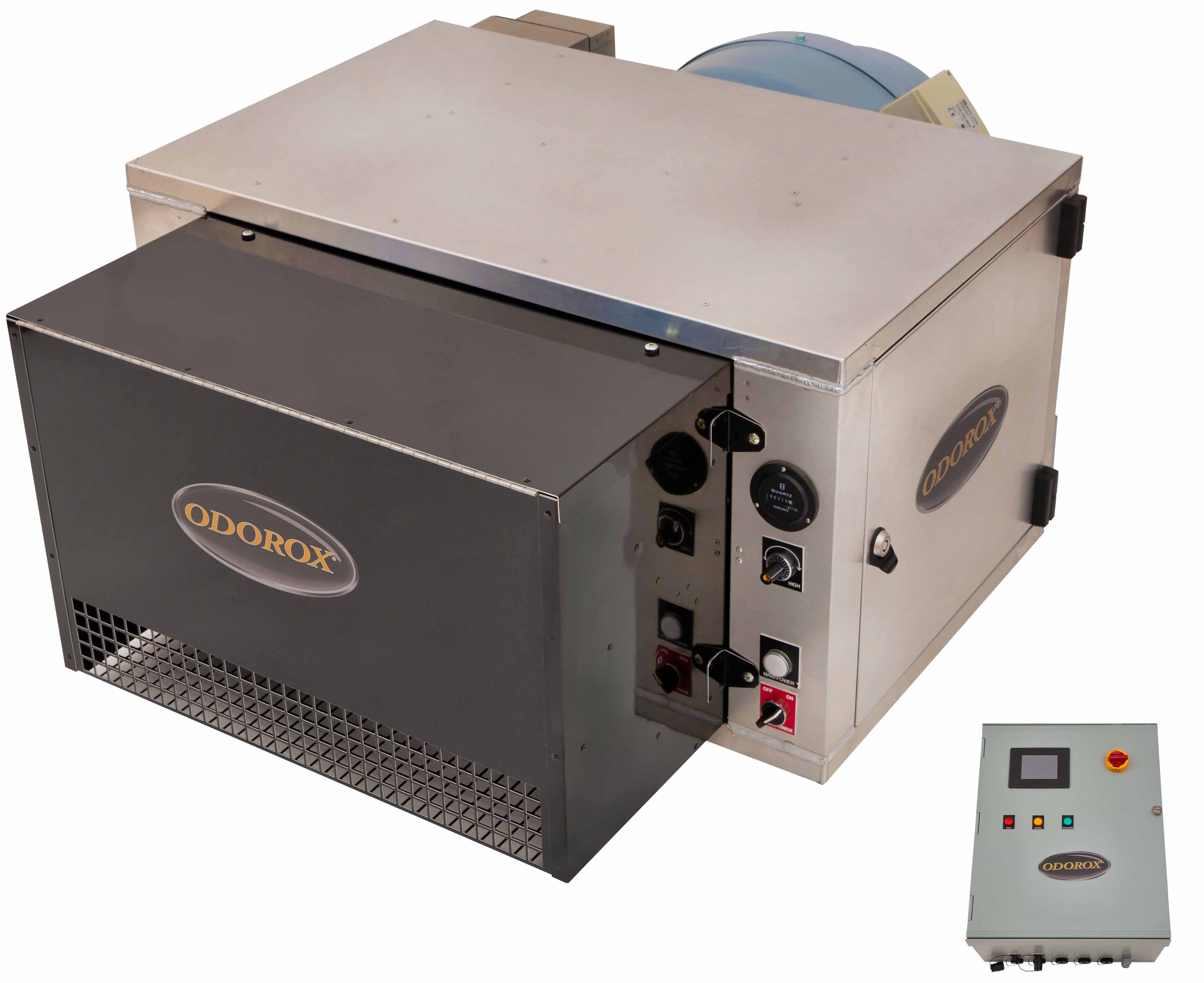 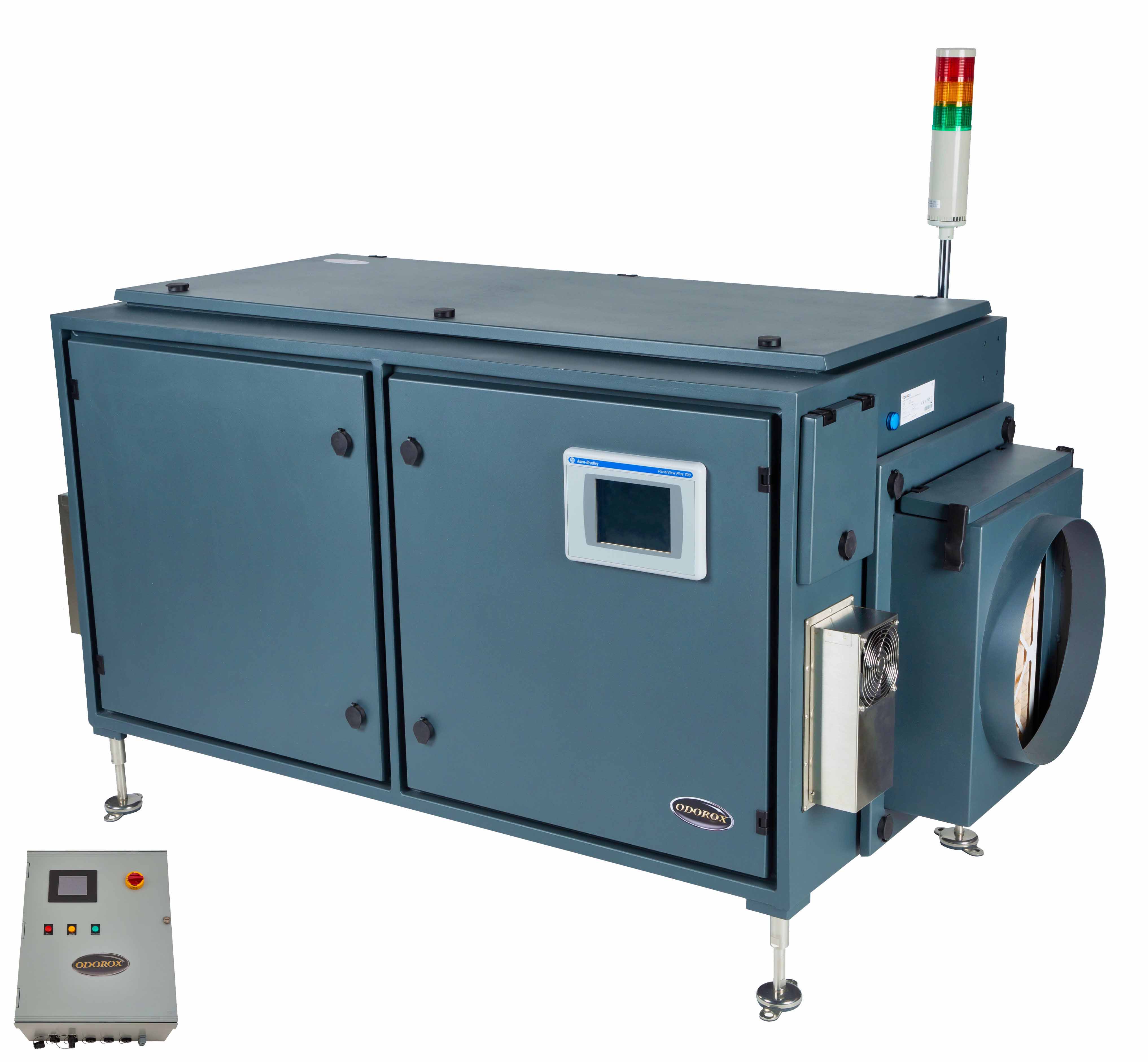 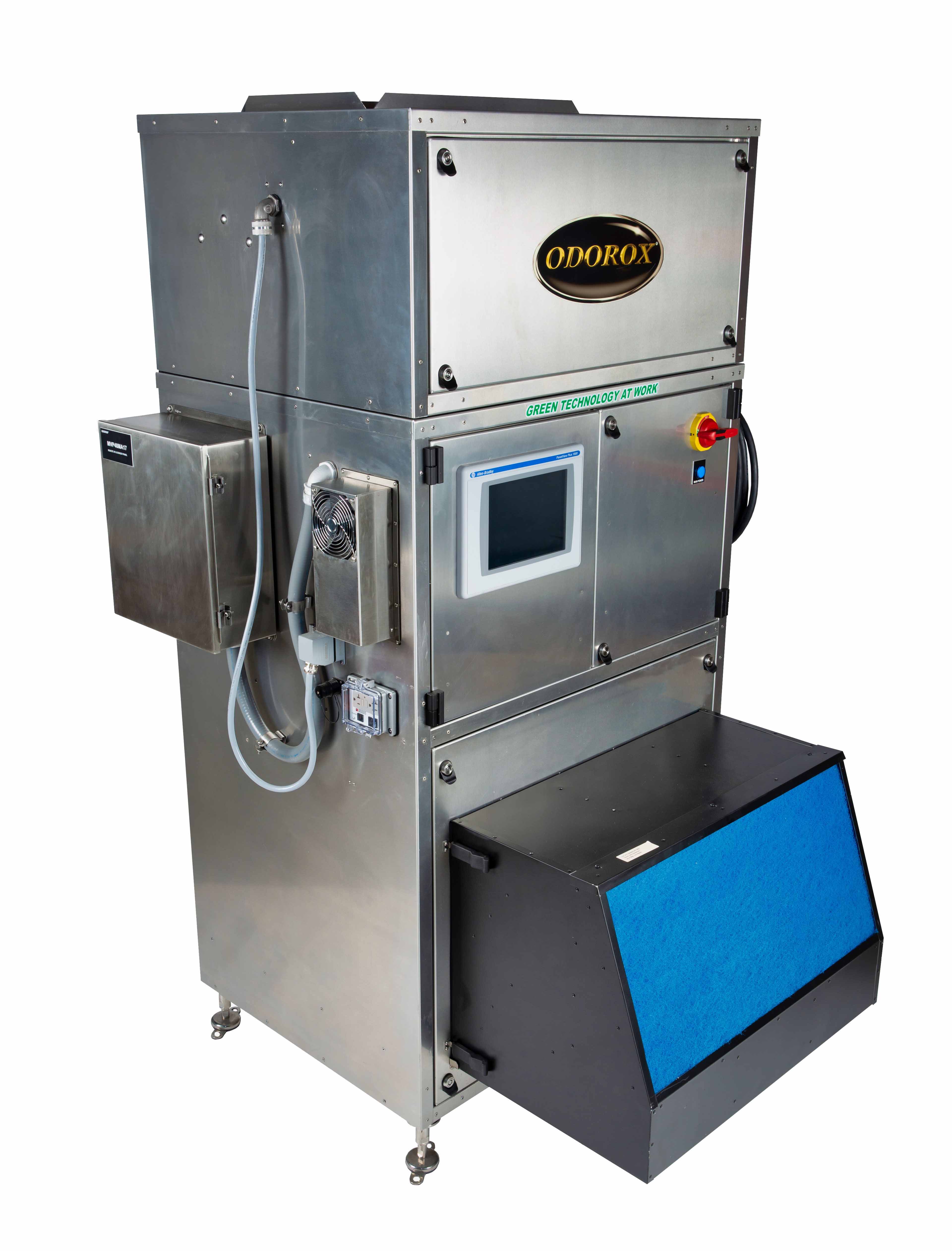 The MVP™ series units are capable of rapidly breaking down massive amounts and type of Volatile Organic Compounds (VOC's) while simultaneously irradiating and destroying a long list of biological pathogens. The MVP48™ unit is designed for heavy duty air processing in the largest industrial and commercial applications that require a higher level of oxidant output. 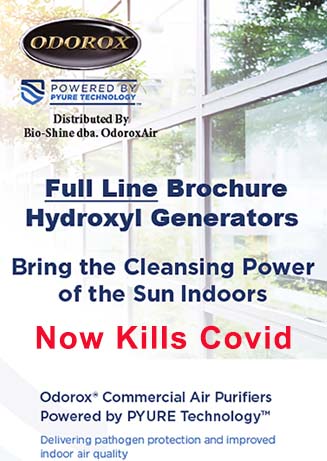 Find out more about our products by downloading our brochures.

Thank you for selecting Angels to test your Odorox Hydroxyl Generator in our hair and beauty salon during the month of November. As you know Hair Salons are full ofVOC's (Volatile Organic Compounds) and other difficult odors derived from chemical solutions used on a variety of applications such as perms. Some of these odors are nearly impossible to get out and at times can be irritants to my employees or customers.
Your machine was simply amazing, not only did it get the airborne odors out of the ambient air in only a few hours, but after operating over night all of the odors were eradicated from the walls, surfaces and furniture. Each morning we came into an
. odorless sanitized environment that felt fresh and clean. We don't understand how you got the odors out of the furniture without it passing through the machine but we can't complain about the result
When you informed me that the elevated oxygen that emits from the machine would eliminate the tiredness we all feel by the end of the day I didn't believe you. Well I must
say I will never doubt you now, the clean oxygen rich air not only surprised me in how it eliminated my normal afternoon fatigue but other customers commented on it
too.

Thank you once again for showcasing your technology in our facility.

To Whom It May Concern:

This past holiday season, I experienced significant smoke damage in my home from an electrical malfunction in my oven, which occurred when running the oven cleaning cycle on a timer in the middle of the night?it appeared that the thermostat had stopped working, and the oven temperature just kept rising and rising. When the smoke detectors went off, I wakened and opened my bedroom door on the second floor and saw nothing but smoke in the hallway?I could not even see downstairs. There were no flames, just heavy smoke.

The smoke had traveled throughout the first and second floor of my home. A strong odor was detected in the air, and it went into all the closets on both floors, affecting most of the clothing in them. I opened the windows in the home to get cross ventilation and waited outside until sufficient smoke at exited so I could go back into my home. At that point, what remained was a foul odor from the smoke, which was from the protein in the oven as well as some of the plastic surrounding the oven.

The next day, when I went to a meeting, several people in the meeting noticed the smoke odor on my clothing and asked if I had been in a fire. This was an uncomfortable situation to say the least, as I was expecting to host family during the holiday season, not to mention the embarrassment experienced in client meetings. Anxious to remedy the odor problem I contacted Odorox Air Technologies (OAT) in Basking Ridge NJ to see if their Odorox equipment might be able to help my situation.

The guys contacted a local Paul Davis restoration firm, who agreed to operate the Odorox hydroxyl generators at my home to assist in the clean up. Felipe Rodriguez ("Phil") from Paul Davis Restoration & Remodeling followed the instructions given to him by Odorox personnel, and in a matter of just a few days successfully removed the smoke odor from my house (most of it had dissipated after just one day). Paul Davis had installed three of the Odorox machines on the two floors as well as a number of fans to move the air through the house.

Besides the obvious benefit of eliminating the smoke smell, I appreciated not having to leave my home during the clean up process?that is because the clean-up process does not use any ozone, which would not have been safe to be around..

It also was interesting to note that the local Maryland Paul Davis folks, having not heard of this hydroxyl technology, were very skeptical of its ability to work. When they came and installed the equipment (shipped to them by Emerald), they said that they could come back the next day with their own equipment to take out the smoke that the Odorox equipment didn't do. When they came back the next day, they were truly amazed at how quickly most of the odors had already been removed much faster than through their more traditional methods they became believers literally overnight. And given that this technology did not require that I vacate my home and dry clean my clothing, treat carpet, etc., they were more than impressed.

Unrelated to the smoke damage, Phil found some mold in my basement (it was from a water leak a few months earlier). I had mentioned that the Odorox equipment could kill the mold spores as well. So once the smoke cleanup was done, and following consultation with the Odorox personnel, I moved one of the Odorox units on the job to my basement to deal with the mold. I am pleased to report the mold is gone with the help of the Odorox and additional clean-up from the restoration crew.

As a business owner and building professional who works with commercial and institutional facilities managers facing odor, mold and other indoor air quality issues threatening their companies, I can say with a great deal of confidence that the Odorox hydroxyl technology will eliminate these types of problems faster and with less disruption and at a lower cost than other previously available means. A big thanks to Odorox!